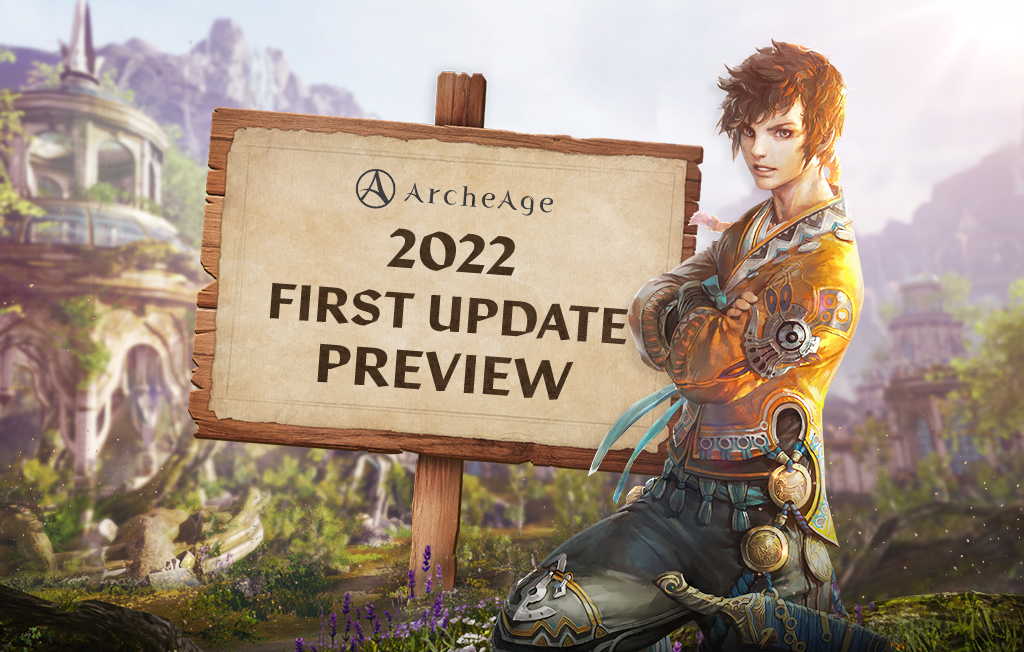 Greetings everyone, this is Ham Yong Jin, Product Developer of ArcheAge.

Happy new year everyone! Hope everyone is having a great start to the new year.

The ArcheAge development team is making efforts to make changes to the game while servicing both KR and NA regions.

Thus, the March update will be at the end of the month, instead of the usual schedule.

Today, I would like to go over the update coming in March, and the long-awaited Great Prairie of the West.

We're also going to answer some of the questions and requests sent from you in detail.

* Below contents are currently in development and can be subject to change upon actual release.

We hope they give you new growth goals since there haven't been new cloaks since December of 2019 with the Awakened Erenor Cloaks.

At Sungold Fields and Exeloch of Auroria, the factions are in a fierce war over Jola, Glenn, and Meina.

To add more excitement to the battle between factions, the region will become a Conflict/War zone when Raid Monsters appear.

The target of Interest is currently a one-way system where you could register players without their agreement to view their online status.

As such, it couldn't give you detailed information, such as the current location. To remedy this, we're changing it to a Friend system where both parties agree upon registration. 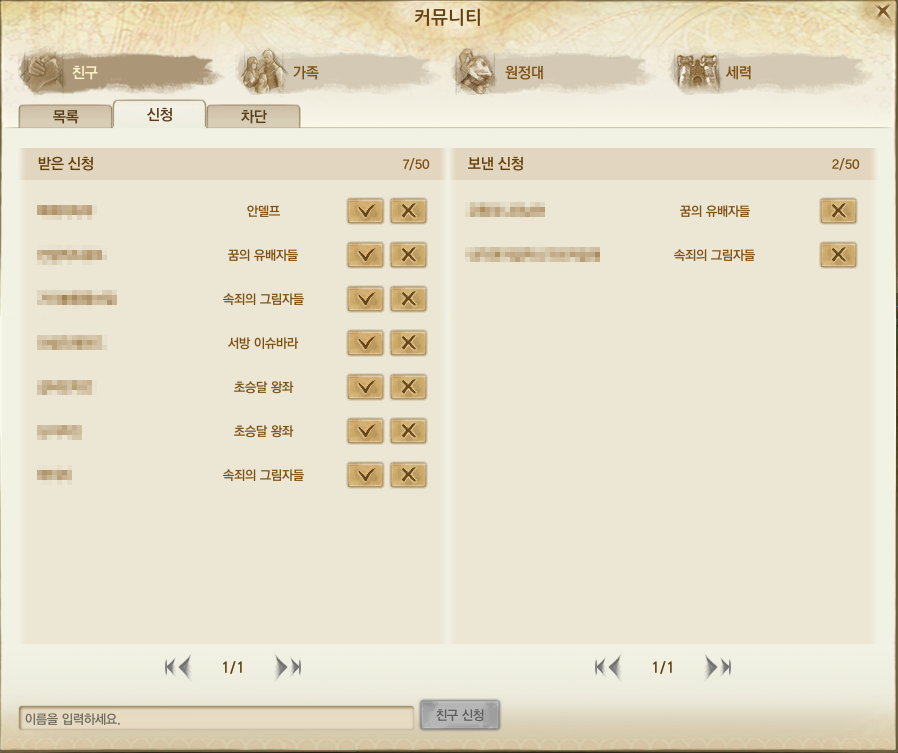 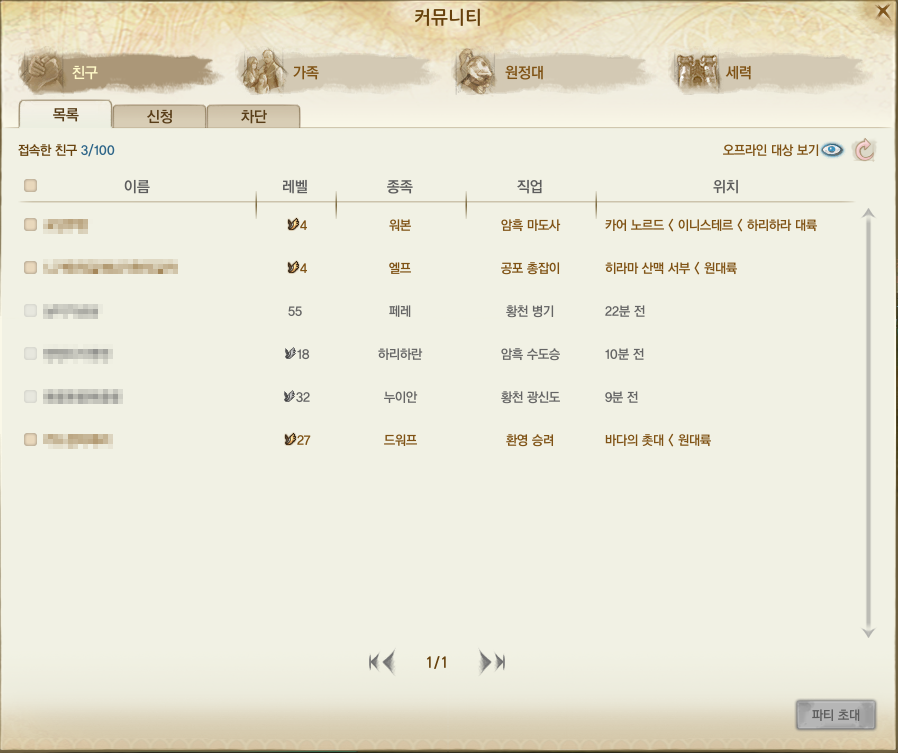 We're also updating the requested Block system, along with allowing mail sending with other factions again.

You can now block only up to 100 players, but also have the option to auto decline Party Invites, Private Trades, and Request Duels from them.

However, with the above update, the Target of Interest list will be reset on the day of the update.

We apologize for the inconvenience and ask you to make new registrations with your friends.

Moreover, we plan to add more updates to the Guide Rest Area, so please guide any new players there if they need help.

The long awaited Great Prairie of the West update has been confirmed to be updated in Summer this year and we are busy working on it.

Here's an overview of the region and its exclusive contents. 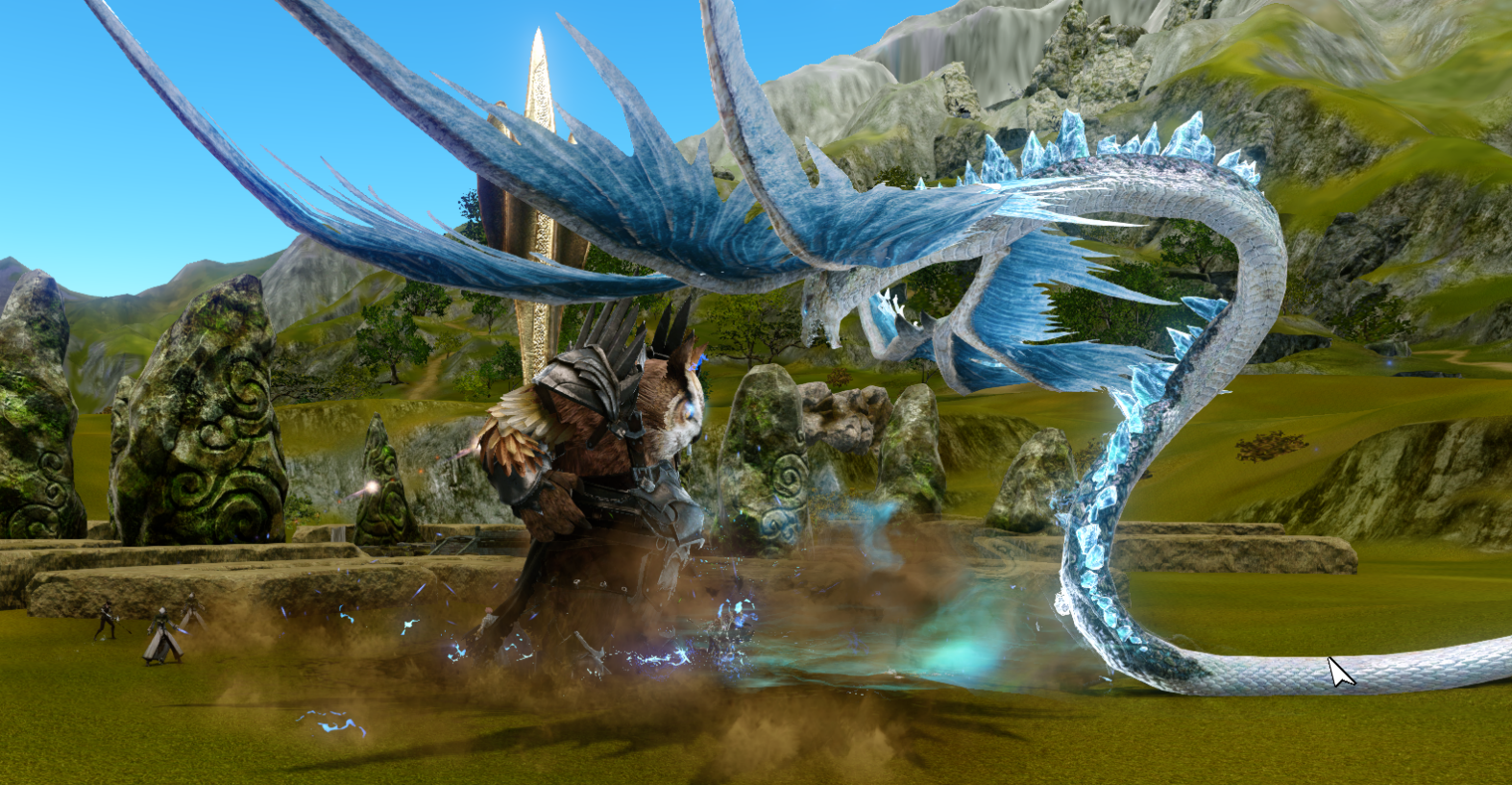 The Great Prairie of the West is an area where the Firran call their eternal lands.

This piece of land, with the mighty Plains Eye mountain rising high, is a place the nomad Firran consider their homeland.

According to Firran storytellers, the mountain is where the Sun Father gave them the right to live in the great prairie.

The Firran shaman climbed the mountain to perform worship ceremonies for the Sun Father. 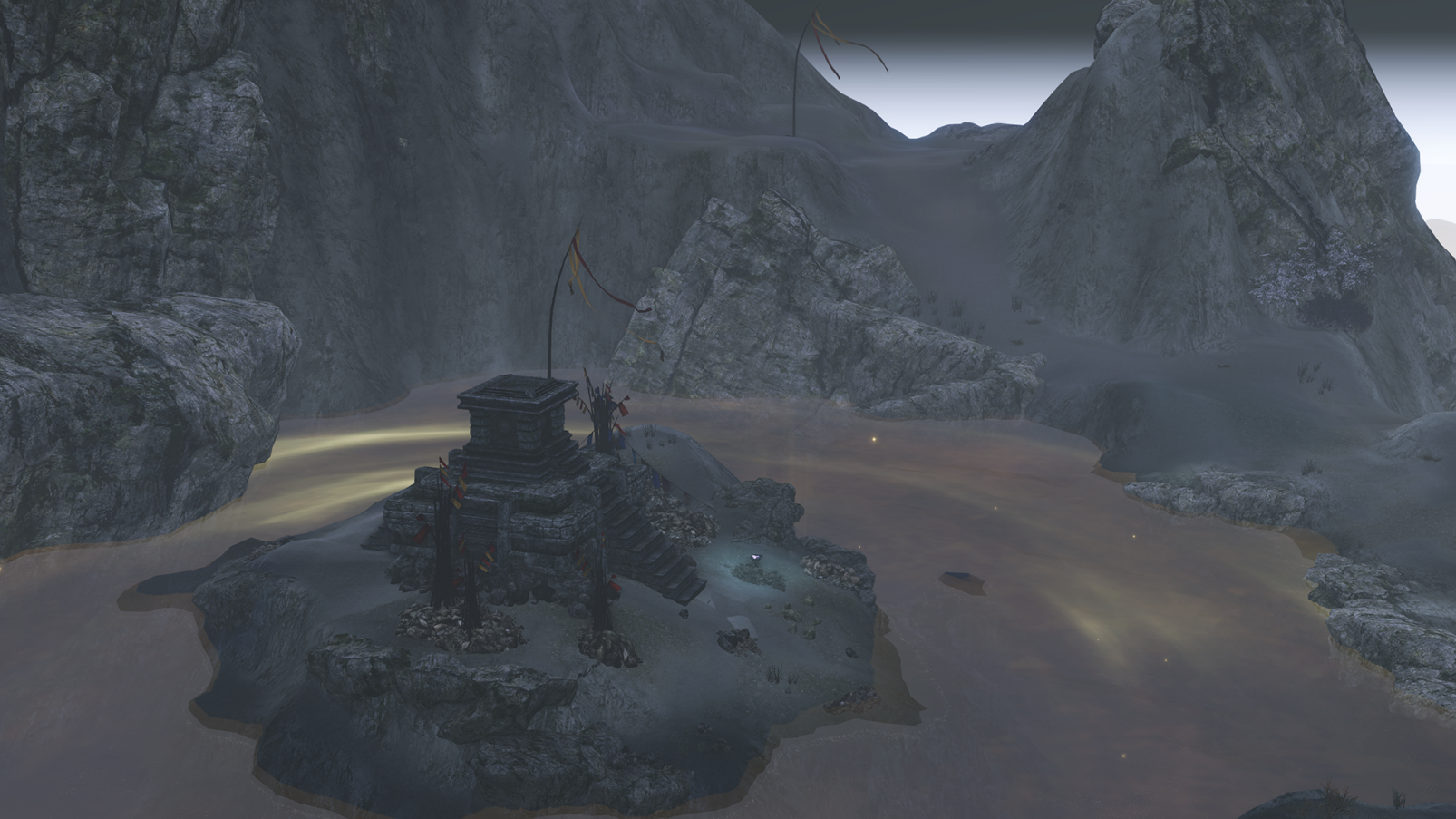 
It's the remnants of the Epherium occupied area, the ruins found at the Great Prairie of the West.

While it was once a base where the Epherium kingdom used to bring the Firran into submission after reclaiming Terena,

it now remains as a ruin due to being wiped out by the Windwhips who were led by Tahyang in the Terena battle.

The blood of the fallen Firran from the Terena battle remains to permeate strange phenomena throughout the Great Prairie till this day, as it came together with the strange energies which were dormant beneath the grounds. 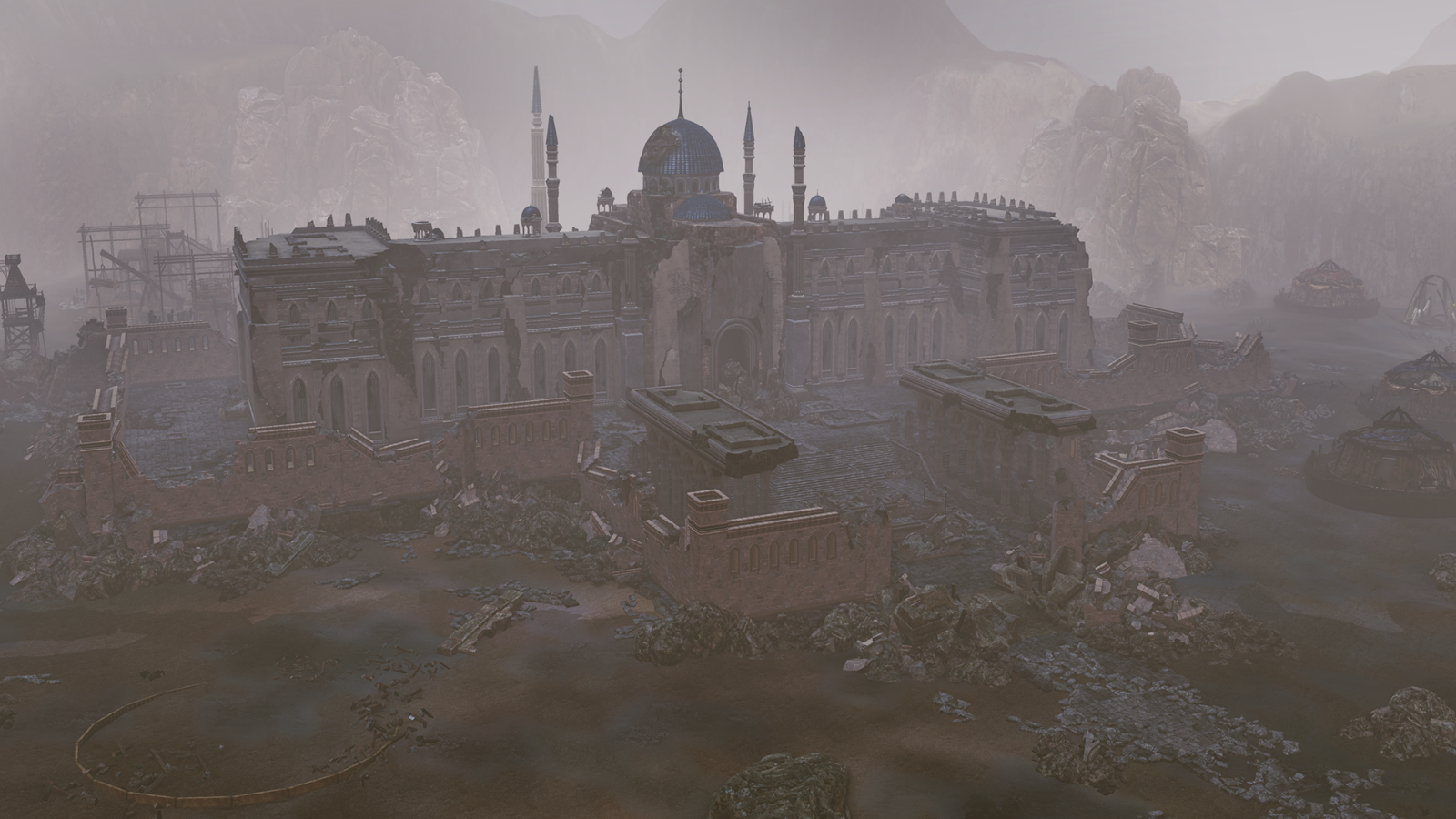 The blood of many Firran heroes was spilled on the grounds of the Great Prairie from the Terena battle.

While there was peace on the prairie after the battle ended, the desires of the fallen heroes who wanted to protect the prairie became spirits and remained on the grounds.

A tombstone was built in remembrance of those who sacrificed their lives, and as time passed by, the desiring spirits of the fallen heroes began to gather towards the tombstone.

The spirits that gathered around the tombstone, came together with the strange energies of the grounds and gave birth to a new lifeform called the Guardian of Celestia.

We'll be back for more details on the summer update in a future post!

(Image) Guardian of Celestia of the Great Prairie

We are receiving your suggestions and feedback through our website's customer service route and through our ArcheAge creator contributors.

While we mentioned before that we are looking into all of your suggestions,
we never had the chance to share how our plans were going. We'd like to take this opportunity to share some more information.

Q. Please resolve the bottlenecking issues in the main quests.

We're aware that many experienced difficulties with the quests during the initial stages of when the server opened.

There was especially the issue where the required "Cactus" item from the main quest caused a hindrance for quest progression, and we're aiming towards improving these types of issues through each update.

Most of the issues with quest objectives requiring the killing of certain monsters or interacting with certain objects were improved by changing the rules of monster kills and how object interactions are done.

Q. Please distinguish the key inputs for riding your own mount and other mounts.

We are planning to add a feature that allows you to 'ride on your own mount only' in the upcoming update in March.

You probably experienced falling beneath the ground from time to time while playing the game. This is a chronic issue with the engine used to develop the game.

While this was improved ever since the game was released, it's still an issue that arises from time to time.

The Escape feature is used to help you to escape from isolated areas when you are stuck,

We applied a rather conservative cooldown time since the skill allows you to teleport to a nearby tomb even when you have Trade Pack limitations.

Still, we are looking into whether the time it takes to escape is actually too long, and checking if it's a problem that the cooldown keeps going even when the skill stops in the middle of casting.

Therefore we are looking into how we can improve the system.

Since Co-Raids involve questing by 100 players and involve checking the Raid Member locations and statuses all in real time, it's unrealistic to expand the raids.

We're hoping that the changes we implemented to the rules of monster-kill prioritization during quests in the January update have somewhat improved the experience.

Q. Please improve the faction proportion and the Exile system.

First of all, the faction points per server are calculated based on the Leadership of the character participating in different competitions, equipment points, number of participants, and Contribution.

Although it will be difficult to change this in a short period of time, we will improve the faction proportion following the below direction.

We will lower the Exile system requirements, enable you to change factions more freely, and enhance the small faction buff.

However, we will analyze your major concern first, which is the faction sabotage situation of all servers, then make improvements in order.

Q. Please solve the acceleration of the faction issue due to faction competitions (Ynystere, Cinderstone Moor).

Although Ynystere and Cinderstone Moor are symbolic faction competition bases, we understand that the disadvantage you get upon defeat is excessive.

We will improve the situation of having your base stolen due to faction competition results as soon as possible.

Q. The Siege Risopoda harms the fun of the game.

There is a weekly average of 10 Siege Risopodas per server, but we are continuously checking this as we have been receiving many reports about it.

Instead of decreasing the number of Siege Risopodas, we are preparing a giant pet balance update and a Siege Risopoda appearance change in the future.

We will announce the plan details and schedule according to the game's development stage.

In the Akasch Invasion at Ipnya Ridge, characters from all factions gather to defeat various monsters.

It was inevitable to set a limit on the number of participants to create a pleasant gameplay environment, but this also has been limiting players' participation itself.

We are equally aware of the inconveniences caused by the video played whenever you enter the content, and the shortage of quests such as Void Compasses, Arcane Spheres, etc.

We will start making updates on the elements that can be improved first as soon as possible, before making an update that aims at structural reorganization.

Q. Please make a penalty for players who cancel dungeon matchmaking at the end to buy time.

This has been requested since long ago, but we were considering it because of the difficulty of judging the penalty target's intention.

However, we have been receiving many reports about this issue, so we will first of all apply an entrance penalty for actions such as entrance delay, forced cancellation, etc. as soon as possible.

We have received your opinion that it is hard to see the white mouse cursor because the shortcut keybind window is semitransparent.

We will try establishing a goal for each update to improve the game's UI even little by little.

We are revising all your opinions on different content improvements, bug fixes, etc.

For changes that require the opinions of many more Royal Archivists, we will conduct an in-game survey and collect these opinions to make our next update plans.

A healthy, mundane life seems more dear to us than ever these days.

We will keep doing our best for you to enjoy your day with ArcheAge.